A style that grew out of fashion is now back. We will have to thank the hipsters for this one. There is no moustache family more iconic than the Handlebar mustache. The Handlebar is a large family that groups together a variety of mustaches with each having its own unique identity.

This type of moustache requires a massive amount of virtuous patience. It takes months of grooming, combing, and trimming to get the required length and style. They will vary from looking unkempt to amazing whilst growing and you might feel the inkling to trim it when it is in an unkempt state.

It will take about three months for your handlebar to reach its full potential, Therefore, should you want to trim the beard, you shouldn’t touch your mustache. Patience is a virtue

Your perseverance will pay off however because as the hairs get longer, regular combing or brushing will train them to grow in the desired direction. Your mustache may droop a little, investing in a good mustache wax can keep the shape of your moustache. Eventually, the moustache will retain its form even when unwaxed.

When it is completed, the handlebar mustache is the envy of all moustaches. The association with hipsters is obviously one some will find comical but a classy Handlebar mustache is beyond any criticism you can receive. It becomes admired by your peers if properly assumed. Rocking this mustache will however depend on your fashion sense and haircut, so make sure to get those on point before attempting this magical feat.

The moustache is guaranteed to get covered in food and drink. It will poke and curl into your mouth and your love may possibly want to slap you across your moustache. For your partner, the early onset of a Handlebar may start off as a minor irritation then transition to kissing a lion’s mane.

How to Grow a Handlebar Mustache? 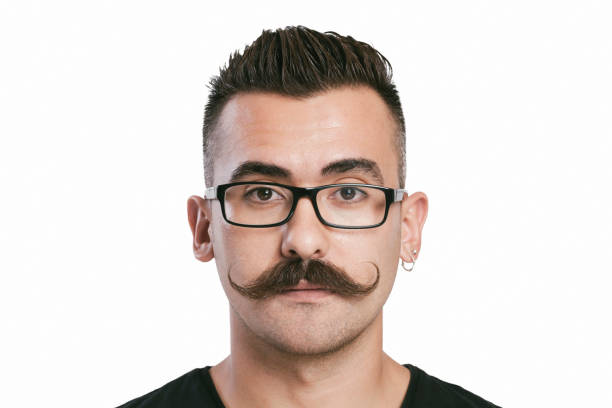 The simplest method to start growing a Handlebar mustache is to grow a full beard at first. It will be more socially acceptable to grow your moustache alongside a beard than to grow your moustache alone. It will look better together while your mustache is growing and when it’s ready you’ll be able to shave your beard and have the Handlebar you want.

The Imperial is grown like any other moustache, but trimming is a definite no-no. Some may argue trimming is not necessary as you want to maintain growth and insist that wearers only comb and wax their moustaches to the side.

You may, however, want to maintain the shape and length and this requires very careful trimming. This is best done at a barber by a professional.

If you trim the ends yourself it can be an absolute failure. Trying to achieve symmetry over and over will result in narrowing the mustache. Trimming the line above your upper lip is an absolute minefield, and doing it incorrectly can leave you with an uneven finish.

Depending on your area, you may or may not be able to find a mustache specialist, but it is definitely worth it to search for one because even with an expert hand and sharp eyes, you will only ever be able to trim from one point of view.

Your barber will be able to critique your moustache and make the measured changes. A professional will ensure that your mustache is properly trimmed and shortened to your taste as well as provide advice for between visits.

After an amazing hot shower, your hair is softened and untangled from any previous shower. This is essential after sleeping because your moustache will usually look unkempt.

Try to not wind long moustaches too tight, you may end up breaking the ends off. It’s as easy as using a cotton swab or even your finger to achieve the desired shape.

Whether your down for a spot of tea or not, the English moustache is certainly a classy feature of any man. Similar to the imperial, it is divided at the centre, and hair beyond the corners of the mouth is shaved clean. It is straight at the ends, however, instead of curling up.

See also  What Would I Look Like If I'm Bald?

This style requires hard and professional moustache wax. The ends are molded at mid-length with the hair at the base wrapped around for support. You can raise the tips to change the centre of leverage so that it is closer to the base. Long points aren’t necessarily required for this moustache, you can achieve it with a shorter moustache for a classy modest look.

Tom Selleck, Nick Offerman, and Freddie Mercury are some names that come to mind. The chevron is a fundamental moustache however, so many famous people have worn it at a point. Although not a strict Handlebar moustache per se, the Chevron shares the trait of wide growth above the lip.

This extends up to 0.6 inches (1.5 cm) beyond the lip but varies. Its main feature is a simple mass of volume that grows naturally and is trimmed relatively short.

The Chevron is the youngest of the Handlebar family. It was particularly popular during the 1970s and 1980s but waned until Movember was born in 2007. Since then, it has been the default choice for many men and an ideal stepping stone to more extreme styles.

A historic classic, a hallmark of Central European leaders. The Austrian Empire and Kingdom of Hungary embodied this style. Later it was adopted by Kaiser Wilhelm II. The Hungarian Moustache is the forefather to the Imperial with heavy nationalist symbolism associated with it.

The resemblance to the imperial is clear, but the differences are also clear. The Imperial is a compact mustache, that brings itself back with twirling. The Hungarian, however, is an unmistakable symbol of manliness with its size.

It’s best to keep it big and bushy with the hair extending outwards from the centre. You can style it, but just letting it grow naturally and brushing it into shape should be enough. Using the normal haircare products and grooming should be sufficient for a good looking Hungarian.

You have way too much time on your hands

Hungarian mustaches require copious amounts of time to grow. An Imperial can be grown out into one though and this makes it easier to attain one. You can obtain and improve it as it grows.

An absolute monster of a mustache, It was coined after the marine mammal of the same name.

A feature of the Celts and the Gauls, it was famous throughout the late 19th Century figures such as Mark Twain and Otto von Bismarck.

During the First World War, it was a celebrated characteristic of European statesmen. French President Georges Clemenceau and UK Prime Minister David Lloyd George were famous for their Walruses.

At some point, it was a throwback to the times of the Wild West. Sam Elliott’s legendary moustache is also a walrus. Jamie Hyneman of Mythbusters wears his trademark Walrus moustache with a Circle beard.

This moustache is a close relative of the Chevron, However, although the hair is simply brushed down, it is grown long and hangs over the mouth.

Like all handlebars, It requires copious amounts of patience to grow properly. Although the resemblance is vague, they would require but a mere manipulation to become one by brushing the hair down.

When the wearer is satisfied with the length, it simply needs combing and snipping to shape. This can be finished as either a straight line or a slight curve, which emphasizes the resolute facade it creates.

The size of this mustache is maybe slightly irritating, causing simple acts like eating, kissing, and drinking to become mission impossible. Although eating dinner in public may attract a bit of attention, this one is still a head-turner and is sure to woo potential suitors.

Now that you’ve handled that!

Now that you have all the knowledge to grow a great handlebar mustache, the only thing left to do is go out and grow it. Being a gentleman is more than just a mustache, however, once you gain the prowess, you have to carry yourself and treat people how a gentleman would. Good luck to you, classy man.