Braun Series 5 vs 7 Comparison made easy. If you’ve recently been in the market for a good trimmer or set of clippers, you’ve undoubtedly noticed all the options available. One could even go as far as to say that the market has gotten to the point where it is nearly oversaturated.

You have everything available from a full-sizes trimmer and clipper to small and sleek compact body shavers. Whatever the situation, one name that you’ve heard over and over or will hear over and over is Braun. Over the years, their brand has grown to become the industry’s standard for performance, quality, and comfort. There are two models in particular that people are comparing. This would be Braun Series 5 vs 7.

All that being said, if you are like most people, you only have a need for one model, and can’t justify buying both. So, which is the better of the two? Believe it or not, this has been a long time debate ever since Series 7 started gaining attention.

A Brief Overview Of Braun Series 5 Vs 7

Series 5 is the standard right between Series 3 and Series 7. It is one that bridges the gap between these two much different models. In fact, that’s exactly why this model was introduced on the market. The company saw the growing popularity of Series 3 and 7 and decided that they needed something in between. This is where the third iteration, the Series 5 came from. That’s right, the Series 5 is actually the third iteration, coming after the Series 7.

It can be purchased in dry operation only, it can be purchased both wet and dry capabilities, and it can even be purchased with or without cleaning stations, charging stations, and other pertinent accessories. The Series 7 was one that hit the market back in 2010, making this year its 10th anniversary, and climbed right to the top of the ranks. The model wasn’t out long before it easily became one of the most sought-after.

All that aside, the most notable thing about the Series 7 has got to be the comfort during operation. While the build is quality and durable, it is the ergonomic design that really makes the Series 7 stand out for most users. This series also features a wide range of buying options, as it can be purchased with or without charging stations, with accessories, or even with cleaning and docking stations. If you get right down to it on a technical level, you’ll find that there are little differences between the performance levels of the Series 5 and 7.

The color schemes and body designs stand way out, but when it comes to performance, you get the best of both worlds.

And, it is the aluminum foil head design that provides these properties. The heads on the Series 5 and 7 are a bit different in looks, but they work virtually the same in theory and concept. They feature two foils that are specifically designed to cut hair close to the skin by lifting and cutting at the root as opposed to mid-snipping, cutting, pulling, or tugging. This not only results in the most comfortable shave possible, but it results in the most effective and efficient.

All that being said if you really had to compare the two models in this general area, you would have to give it to Series 7. This is because it is a bit more forgiving when pressed against the skin too hard. The Series 5 is still recommended by most for sensitive skin and individuals with skin allergies, but the Series 7 certainly is the superior choice.

Despite the lifting and cutting at the root, both the Series 5 and 7 are still lacking when compared to some models available on the market today. This is not to say that they aren’t capable of providing a close and comfortable, efficient shave, but it is just to say that there are some brands and models out there that can do better. However, when comparing the two, you will find that they are both pretty similar in this aspect as well.

In fact, they are so similar in this aspect that it would be hard to say which is better. The two heads are even designed in a similar manner and fashion, as was mentioned above. The Series 7 cassette will even fit right over top the Series 5, although this is not something that’s recommended and could void the warranty.

One thing that a lot of people are going to look at when deciding between the two models is the technologies. This is one thing that people care a whole lot about these days. And, why shouldn’t they? That being said, when examining the Series 5 and 7 in this area, you will see that the Series 7 boasts the Sonic technology. This is a type of technology in the motor that allows it to, according to Braun, produce 10,000 micro pulsations per minute. How could all these vibrations be important?

You combine this with the fact that the model also lifts and cuts the hair at the cut, you’ll find that it is just all-around more effective. It also makes quicker work of longer, flat-lying hairs that would normally be a major problem for most traditional clippers. That being said, do not discount the Series 5 or knock it because it is nearly as effective.

The only difference is, you’ll likely have to do against the grain to capture and cut flat hairs. This is something that makes the process all-around harder and more time-consuming. Series 7 not only make the easier and safer, but it makes it more effective. You could be a sloppy shaver with sloppy techniques and achieve the same results in similar or faster times.

Many have also boasted that the micro-pulsations make the experience kind of feel like a gentle massage. The Series 7 also takes the cake in this aspect as well, providing a better overall experience.

When comparing Series 7 razors to Series 5 razors, you’ll find that the former is slightly faster. When using Series 5 razors, you will notice a low hum. These razors are louder than the new ones. Nevertheless, the Braun Series 9 razors are much faster than both. If your primary goal is to purchase the fastest razor, you’ll need to upgrade to one of the Series 9 razors from Braun.

Still, most men will be satisfied with a Series 7 or 5 razors. With some Series 7 razors, you can switch between 3 or 5 different speed settings. You can choose from sensitive, intense, and normal. This makes it easy to adjust the power depending on which area you’re shaving.

While there are many similarities between Series 5 and Series 7 razors, you’ll find many differences too. Ultimately, the differences are more important. Once you’ve analyzed them, you’ll have a much better idea of which model is going to work best for you. Below, you’ll learn more about the things that set these two models apart.

Since you’re paying a lot for a razor, you’ll want the best of everything and this includes aesthetics. You’ll want a beautiful, sleek razor that you can leave on your counter. Both are very sleek so you will appreciate their appearances. These razors have a premium appearance so they’ll look like a million bucks.

Series 5 models are slighter larger than Series 7 models but both are great in terms of ergonomics and balance. Series 7 razors feature a bland design but it looks okay. When trying to shave tricky areas, you will find that the Series 7 razor is going to be easier and more comfortable to use. This is the case because the frame around the cassette is a bit smaller.

Choosing a razor with flexible heads is highly recommended. The good news is that both models are great in this area. Whether you choose the 5 or 7, you’ll receive a razor that features heads that move forward and backward. You need to be careful when locking your Series 7 razor. If you don’t unlock it, there is a risk that the system will break. This is one of the biggest problems with Series 7 razors. This isn’t an issue with Series 5 razors because the head will move and the lock will engage in another position when too much force is applied. 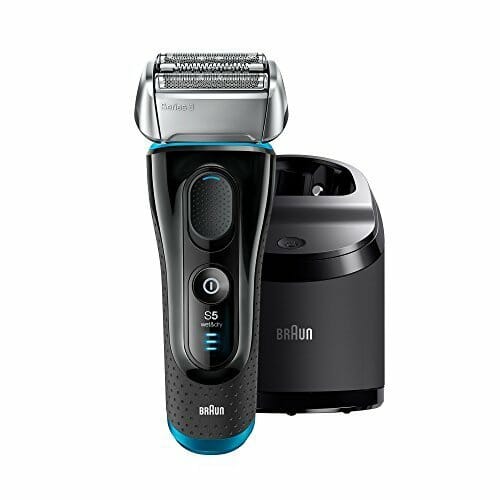 The Braun Series 5 line includes a handful of models. Each is unique in its own way. Therefore, you’ll need to learn about them all before deciding which one is best for you. First, you have the 5090cc and 5190cc. These razors are suitable for dry shaving online. They come with an automatic cleaning and charging station. As for the 5040s model, the razor can be used for wet and dry shaving. The only downside is that this model does not come with a cleaning station.

Series 5 razors are great for men with sensitive skin. They feature a unique auto-sensing technology that allows the razor to adjust to your face’s contours. Furthermore, the head can move in 8 directors so you’ll get a close shave everywhere. These razors offer the following benefits. 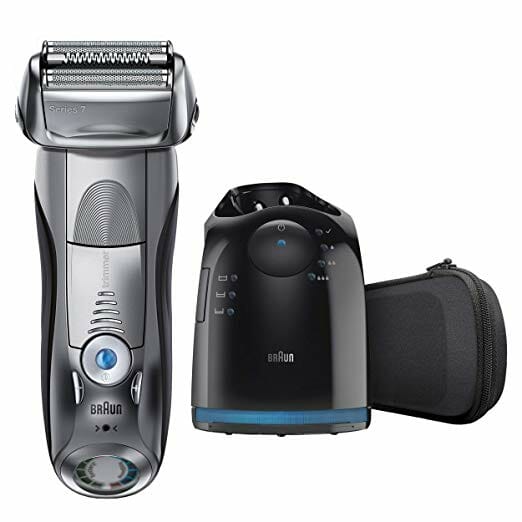 Braun launched its Series 7 razors in 2010. After that, these razors quickly become some of the hottest models on the market. When you analyze the features of these razors, you’ll easily see why they’re so popular. These razors deliver exceptional comfort and impressive cleaning stations. Just remember that the features depend on the model you’re buying.

Most models are suitable for wet and dry shaving but the 760cc, 720cc, and 790cc are not. The aforementioned razors are dry use only. You’ll also find that some come with a cleaning station but others do not. Several colors are available including gray, silver, and black. It is important to learn more about these models so you can find out which one offers the features you want.

Some of the features provided include the following;

Braun Series 7 Vs Series 5 – Which Should You Choose?

Choosing a razor is going to be difficult. You can narrow your options by sticking with Series 5 or Series 7 models. Just remember that they’re vastly different. So, which one will work best for you? Ultimately, that is going to depend on several factors. Are you prone to irritation? Do you have sensitive skin? If you’ve answered yes to both questions, you should buy a Series 7 razor.

Or, would you prefer to save money? Series 5 offers plenty of value for your money. Just remember that it is a bit rougher on the skin so it may not be best for men with overly sensitive skin. If you have more money to spend, you may want to consider upgrading to a Series 9 model.